FAQ: If an LPFM can't be placed at a location, does that mean a translator can't go there either?

To get yourself familiarized with contours, read this FAQ article.

When LPFM was created, the FCC used a simplifed method of the spacing of stations. They originally rejected the concept of contour overlap for LPFM because, in part, the high number of LPFM applications accepted would put a burden on FCC staff if they are written with contours. Of course, three years later, the Commission would take over 15,000 FM translator applications using contours.

The FCC took the hypothetical maximum facility for each station class. Translators were divided into three "sub-classes" based on the service contour size. To determine the minimum distance required, the FCC took the size of the LPFM interfering contour and added the protected contour for the other station. Also, for full power domestic FM stations, the FCC added an additional 20 km to the distance as a "buffer zone". The original intention was to assure that if a full power station was to make a short move, it will not impact the LPFM station.

If an FM translator can't fit in a particular location, a directional antenna or reduced power can be used to "sqeeze" in the translator. Like with LPFM stations, translators can exist inside of the interference contours of full power stations.

Under the 100 watt LPFM rules, 103.5 would not be available due to short spacing to WESR and WJKI:

These distance separations are now in statute and would require an act of Congress to change.

For LPFM, there is no second-adjacent channel short spacing on 103.5.

Now, let's try to put a 250 watt non-directional translator at the same location. 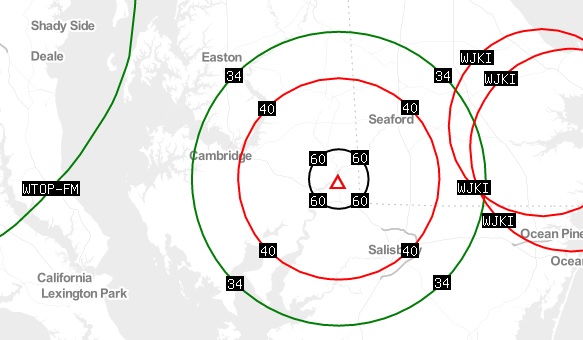 In this case, WTOP-FM is a Class B station and WJKI is a Class A. The curves for those stations are the service contours. 54 dBu for WTOP and 60 dBu for WJKI. The green and red circles are the 34 dBu and 40 dBu interfering contours around the proposed translator in Riverton. Notice how there is no overlap? 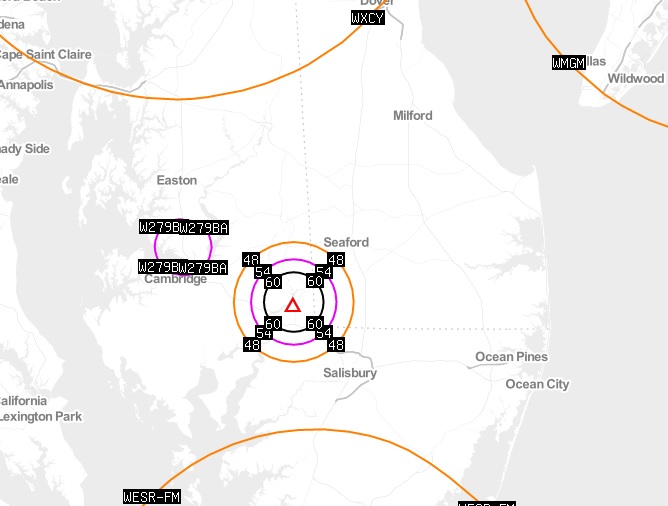 The full power stations (WESR, WMGM and WXCY) are all Class B stations. Notice that there is no overlap of the 48 dBu interfering contour (gold circle around Riverton) and the service contours of these stations and that there is no overlap between the 54 dBu interfering contour of the proposed Riverton translator and the W279BH translator (the pink circles).

Now, of course, the proposed Riverton station would be well inside the interference contours of various stations:

Now that I look at this, I probably would not want to use 103.5 becuase of the incoming from WKJI, especially now that they have an application to move closer to me.

So this brings up another thing to remember, even though there may be a slither of space for a translator, it does not always mean that the channel is desirable for them. Those of us in LPFM experience the same thing.