Yes. FM translator stations are required to protect LPFM stations in accordance with §74.1204(a)(4) of the rules.  FM boosters have a specific protection requirement for LPFM (and other stations) on the first-adjacent channels.

To understand these protections, a quick lesson on contours:

Each broadcast station (full power, LPFM and translator) has a protected contour (sometimes referred to as the "service contour") which (for LPFM and translators) is the 60 dBu contour using the F(50, 50) curves chart. For an LPFM station operating 100 watts at a perfect 30 meters above average terrain on flat earth, this contour will be a 5.6 km radius based utilizing a non-directional antenna. The service contour is intended to be the estimated service area of the station where the listener can expect good service.

The distance to each curve is based on evaluating the height above average terrain (HAAT) in as many as 360 different directions (radials) and then based on the HAAT in that direction and the effective radiated power in that direction (taking into consideration that it can be reduced as a result of a directional antenna), the distance from the station to the distance calculated by using the chart is determined. All of the "dots" are connected and a contour plot is drawn.

In this example, the dots are drawn at 10 degree increments (36 points) and then a line is drawn between them to determine the service contour. Consultants generally use 72 points or if the software can support it, 360 points: 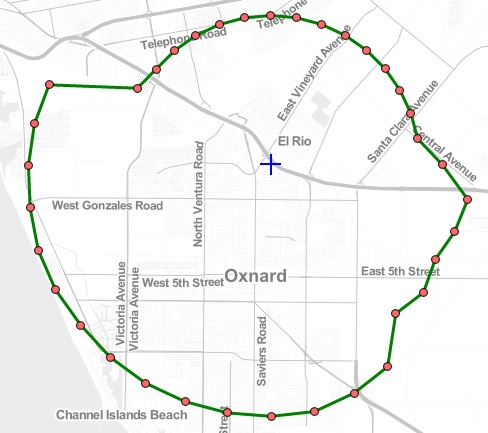 How this applies to translators protecting LPFM stations

FM translators on the same channel (co-channel) that are applied for subsequent to the LPFM station can not specify a facility where their 40 dBu interfering contour overlaps the LPFM protected contour.

FM translators on first-adjacent channels that are applied for subsequent to the LPFM station can not specify a facility where their 54 dBu inteference contour overlaps the LPFM protected contour.

FM translators on second and third adjacent channels are not required to protect LPFM staitons.

LPFM stations that have not yet been licensed (their license to cover has not yet been granted) will be considered operating at the maximum permitted facilities (100 watts at 30 meters HAAT). Once the LPFM station is fully licensed, the actual facility must be taken into consideration. Therefore, if the LPFM station is less than 30 meters HAAT and is operating less than 100 watts (such as to satisfy a second adjacent channel waiver, in accordance with the US-Mexico agreement or due to station choice), then it will not be afforded the same protections that it had while a construction permit.

LPFM stations that are operating a directional antenna for the sole purpose of a second-adjacent channel waiver or for state, county and city public safety agencies operating a traveler's information service will be protected like they are nondirectional, even though they have a directional antenna on the records.  Some translator applicants may not catch that and could file to overlap the LPFM station's hypotheical nondirectional contour.  If this happens, then an Informal Objection needs to be filed against the translator application.

It should also be noted that when computing the curves, all HAAT measurements below 30 meters are rounded up to 30 meters.

In this example, KIND-LP is an LPFM station in Oxnard, CA that was singleton in the November, 2013 filing window. In 2015, FM translator K232EW moved their station to the west. KIND-LP is on 94.1 and K232EW is on 94.3, so this is a first-adjacent channel translator. In order for K232EW to properly protect KIND-LP, K232EW had to use a directional antenna.

The map below shows KIND-LP's protected (60 dBu) service contour in green and K232EW's first-adjacent channel (54 dBu) interfering contour in red. Since the contours do not overlap, the move is permitted under the rules: 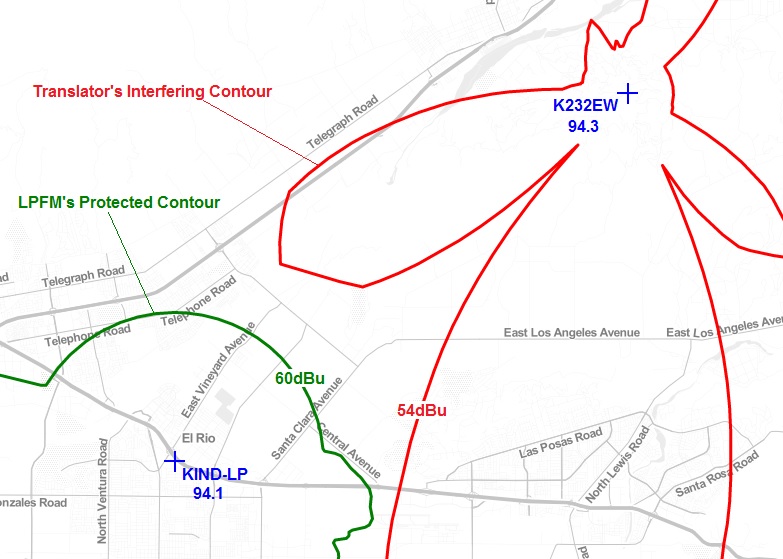