Statement of REC Networks: Nomination of Nathan A. Simington to the Federal Communications Commission 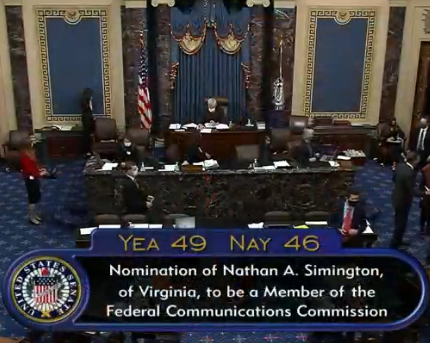 On a party line vote of 49-46, the Senate has confirmed Nathan Simington to serve on the Federal Communications Commission to replace Commissioner Michael O’Reilly, effective on January 20, 2021.

Section 154 of the Communications Act calls for the make-up of the Commission itself.  Specifically, that of the 5 Commissioners, only 3 can be from the same political party.

With the announcement of Chairman Ajit Pai’s departure and the President’s withdrawal of the re-nomination of O’Reilly, this will, at this time, result in a 2-2 Commission with Simington and Brendan Carr on the Republican Party side; and Jessica Rosenworcel and Geoffrey Starks on the Democratic Party side.   If there are no further confirmations between now on January 20, 2021, the new Federal Communications Commission will commence with only 4 out of the 5 Commissioners, two from each party.  In the FCC, a majority is required to adopt action in any proceeding.  Having only 4 Commissioners puts us in situations where the FCC can be deadlocked on issues, including the major issues, such as reform of Section 230, Communications Decency Act, which in part, relates to the liabilities of social media companies on the Republican side and Net Neutrality on the Democratic side.

Based on our review of Simington’s record, especially at the NTIA, we are deeply concerned about this nomination as he may be a “one issue” Commissioner, Section 230.  We are also concerned because the Senate did break protocol with this nomination.  Normally, these nominations to the Commission are normally taken in pairs, when there is more than one vacancy.  We feel that this vote should have waited until after the Joint Session confirms the electoral votes for President.*  Based on the outcome of the Joint Session as well as the two runoff Senate elections that will take place in Georgia, we fear that the FCC could remain in a deadlock position for a period of time.

It is important to realize that even with a deadlocked FCC, the Section 230 issue will also not be able to move forward.  There are other issues that will also sit in limbo, such as Net Neutrality, broadcast ownership reform, rural access to terrestrial broadband, low income student access to broadband during a global pandemic, as well as individual issues such as the recent Petition for Reconsideration filed jointly by REC and the music industry in respect to FM program duplication as well as the Reconsideration filed on the Commission’s handling of the LP-250 issue.  While it is unlikely to jeopardize the upcoming NCE filing window, it could impact whether we will have another LPFM window any time in the near future.

For the past 4 years, Chairman Pai’s staff has been very accessible to REC, while in contrast, O’Reilly’s staff really did not want to be bothered.  We are not yet aware of Simington’s views on LPFM, noncommercial broadcasting, community radio, commercial station ownership and overall diversity in programming and ownership inside our FM and AM spectrum, but we should know more as time progresses.

While we acknowledge the concerns that some have on the nomination of Simington to the Commission, our bigger concern is around the procedural issue that we will face for up to the next two years if in the event of an opposite-party (to the President) majority in the Senate.  In the event of such a situation, we would hope that the Senate does the right thing and confirm a fifth Commissioner in order to prevent the deadlock situation.

Especially now, in the middle of a global pandemic, we cannot allow the progress of communications regulation to stop because of political squabble.  Our country can only lead if proceedings are led through to adoption and not hung up by a 2-2 Commission.

We are not telling anyone in Georgia how to vote. We are only explaining the aftermath based on the outcome of various events that have yet to take place:

Jessica Rosenworcel’s term expires in two years.  Whomever is President can nominate a Democratic Commissioner and depending on the majority of the Senate at that time, the nomination can be blocked.

Again, the future of the FCC is very dependent on the Joint Session and the Georgia run-offs.  REC is preparing for any of the four potential outcomes indicated above.

We can’t allow politics to stop progress, especially in LPFM, a service that may have started based on influence from the left as evolved into a bipartisan service with the Local Community Radio Act of 2010 and a very diverse mix of licensees on both sides as well as in the middle of the aisle.

A deadlock will not totally stop us, but it will make things a little harder.  We need to avoid that deadlock, either way.

* - Due to the ongoing dispute of the Presidential election results, REC Networks has made a careful decision to not make a position on whom the President-elect will be until the outcome of the Joint Session of Congress that will tabulate and confirm the electoral votes.  At the conclusion of that proceeding, REC can focus its efforts, based on the political party of the winning administration.  Until then, we are trying not to take sides.