The Federal Communications Commission has denied a Petition for Reconsideration filed in MB Docket 19-3 (the NCE/LPFM administrative rulemaking proceeding) on procedural grounds, upholding the long-standing “one winner per group” policy when resolving mutually exclusive (MX)/competing applications where multiple applications could not be granted due to contour overlap (NCE) or distance separation (LPFM) requirements.

The Petition, filed by Discount Legal called for the Commission to re-look at “secondary grants”, which are situations of where, after eliminating less than qualified applications or applications that did not meet FCC requirements would create a “stray” applicant that would otherwise be grantable if the unqualified applicants are removed. 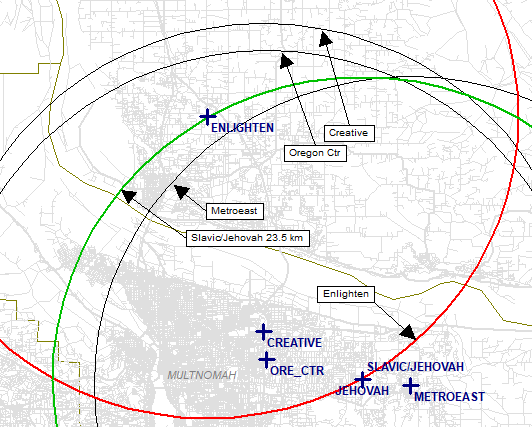 An LPFM example of such a situation took place in the 2013 filing window in Portland, Oregon’s MX Group 283.  In this case, there were 6 applicants. Three of those groups (on the map as CREATIVE, ORE_CTR and METROEAST) aggregated 15 points and another two (SLAVIC/JEHOVAH), aggregated 10.  The sixth applicant in Vancouver, WA (ENLIGHTEN) was a 4-point applicant.  In response to objections filed by the 10 point group against the 15 point group, it was determined that the 15 point group had defective applications (such as not having a board member sign the original application) and two members of the 15 point group were dropped thus causing the remaining group to lose their aggregated points resulting in the 10 point group being the winner.  The Vancouver station was mutually exclusive to two members of the 15-point group but was clear of the 10-point group.  Because the Vancouver group only claimed 4 points, they could not aggregate points with the other members.  Despite the fact that the dismissal of the 15 point group caused the Vancouver station to now be singleton, the FCC stated on reconsideration, that to grant Vancouver at that point in the window processing would have been considered a secondary grant.

In the NCE world, we have seen past cases such as in Hawaii where a channel was otherwise available over a far-reaching area and could be applied for over several islands and there was a large number of applicants applied.  The winners of the group were in one part of the island chain where losing applicants, that would have otherwise been granted on the other side of the chain were dismissed, despite the fact that they could have otherwise have been grantable, especially in Hawaii as stations can overlap contours as long as the contour overlap takes place entirely over water.  This is also sometimes referred to as the “daisy chain” effect.

The Comments filed by Discount Legal in 19-3 and in the nature of the Petition called for the ability for these “orphaned” applicants to be grantable since they would otherwise meet the technical requirements.

In response to the Petition, the Commission stated that Discount Legal’s pleading is procedurally defective because it does not allege any change in circumstances or offer any newly discovered facts that were not otherwise presented during the rulemaking proceeding.  Independent of the procedural filing, the FCC denied the Petition on the grounds of merit stating that to permit secondary grants would cause a significant burden on FCC resources.

The full Order on Reconsideration can be viewed here.

For the upcoming NCE and LPFM filing windows, the Commission has made some rule changes in respect to MX groups.  These include:

In LPFM, the tie breaker is only invoked if there are more than 3 equally qualified applicants and it involves taking the three applicants with the oldest community establishment dates and placing them in a mandatory time share.  Mandatory time sharing is also used in NCE in the event that if a tie remains after two (eventually three) different tie breakers are first applied.

The final rules regarding the various changes made to the rules in MB Docket 19-3, as well as 19-193 (LPFM Technical) are still being reviewed by the Office of Management and Budget as a part of the Paperwork Reduction Act.

In August, Chairman Pai had stated that an NCE filing window will be coming soon and then once that window has settled, then there would be an opportunity for another LPFM window.   REC is currently speculating a window for new NCE in the reserved band (88.1~91.9) in early 2021 and an LPFM window in mid to late 2022.