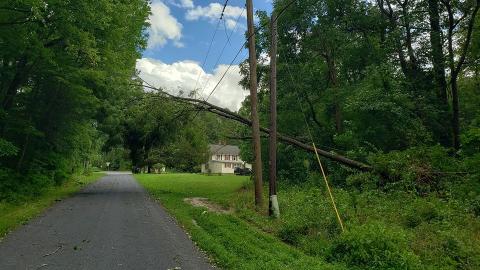 Updated 8/5 at 2:00 PM to reflect resumption of audio streams.

On Tuesday, August 4, the effect of 60 mile per hour gusts resulted in multiple trees falling on power lines causing a power outage at approximately 9:30AM EDT that affected the Riverton area, thus impacting operations at REC.  4 miles south of Riverton in Mardela Springs, a tornado touched down causing a home to be lifted off of its foundation.  In the course of 5 hours, the DASDEC-II EAS decoder at REC Networks picked up 23 tornado warnings, including 7 for Wicomico County where Riverton is located.

At approximately 10:45 PM on Tuesday, Delmarva Power has restored service to Riverton.

Here is a current update on REC operations:

REC does note that in accordance with ongoing tradition, LPFM stations that, in the past have paid REC for services (renewals, EAS, modifications, etc.) and were directly impacted by Isaias and is not silent, can request REC to tender a silent notification or silent STA for the station as well as a resumption of operations at the station is back on the air, at no charge.  Please contact REC at 202-621-2355 (787 334-3199 in Puerto Rico) for assistance.  (Modifications, license applications and extension of STAs are charged at regular rates.)

Thank you all for your support and patience.  REC would also like to give a warm word of thanks, not to just the Delmarva Power crews who handled the Riverton outage, but also the "mutual aid" crews from many electric, telephone and cable television utility companies who converge in an "affected area".  It is rare that Delmarva becomes an "affected area", but it was nice to see the many trucks from different companies on the roads of Salisbury.