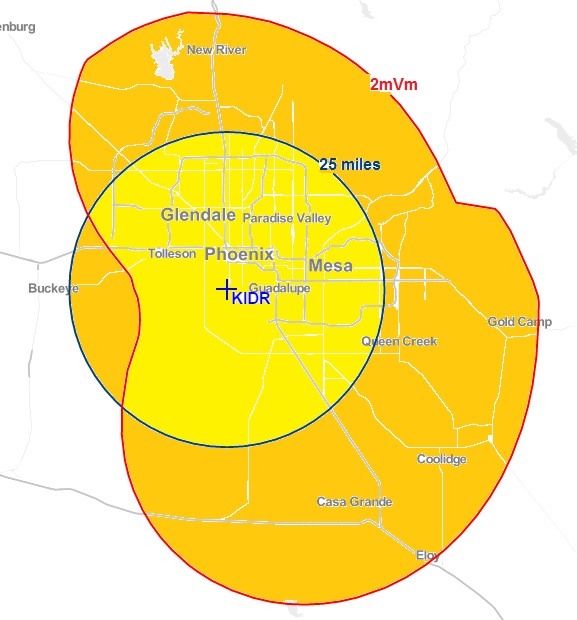 2 mV/m daytime contour (red) of and 25-mile radius around (blue) of KIDR(AM), Phoenix, AZ. Translators may be placed in the yellow area under current rules and can be extended into the orange area with the new rules effective April 10.

Starting on April 10, 2017, the new rules regarding FM translators for AM stations and how far the 60 dBu protected service contour of the translator can extend will go into effect.

Like how FM stations, including LPFM stations have protected service contours that designate a primary service area where there is an expectation of station reception, AM has a similar contour.  The contour designates where the AM signal is expected to reach a 2 millivolt per meter (mV/m) field strength.  The shape of the contour depends on antenna directionality as well as conductivity of the ground in the area around the station.  The map to the right is KIDR, an AM station operating on 740 kHz in Phoenix with 1 kW into a directional antenna.  The contours the FCC takes into consdieration for this rule is the daytime 2 mV/m contour.  Most stations will have different 2 mV/m contours at night.

At this time, FM translators carrying AM stations were restricted to keeping their 60 dBu protected service contour within the AM station's 2 mV/m daytime contour or 25 miles, whichever is shorter.  In the map example, the translator's 60 dBu service contour can not extend anywhere outside the yellow area on the map (including the area to the west where the 2 mV/m contour does not reach more than 25 miles from the station.  Like with "fill-in" FM translators for FM stations, FM translators carrying AM stations are still restricted to 250 watts at any height above average terrain (HAAT) as long as the protected contour remains within the yellow area.

With the new rule going into effect, the 60 dBu contour of the translator can be anywhere inside the 2 mV/m contour of the AM station or 25 miles, whichever is greater.  Applying the new rules to the station above, the protected contour must remain within the yellow and/or orange areas of the map.  This gives AM stations more flexibility in placing their translators including in some cases, being able to go with a non-directional antenna instead of a directional antenna due to the service area rules.

FM translator stations that were granted a "250-mile" move during the two filing windows in 2016 are being given another opportunity to move their station.  During this opportunity, a translator will be able to make a move that would otherwise not be a "minor" change (see below).  The only catch is that they must specify their primary station as either the AM station that they were authorized to carry during the 2016 window or the station they were authorized to carry prior to the 2016 window.  In other words, they can't move it to yet another city and specify a different station.  Also, the location they move the station to must remain within 250 miles of the original location of the translator prior to the 2016 window.

What is not changing?

It's important to realize that with this decision, FM translators being operated as fill-in service are still limited to 250 watts effective radiated power regardless of the antenna height.  Even with that 250 watt limitation, a translator's interfering contour may not overlap the protected contour of another full power, LPFM or transltor station.  Translators are not required to protect LPFM stations on second or third adjacent channels.  Translators on intermediate frequencies operating more than 99 watts have additional protection requirements towards full power facilities on frequencies +/- 10.6 and 10.8 MHz.

LPFM stations need to be aware that since there is no window for new translators, it is still possible that a translator in your community may change channels to your channel and even though the translator is protecting your station's service area, contours can be deceiving.  If your station has listeners inside the translator's 60 dBu service contour and your station has been on the air and broadcasting prior to the translator commencing operations, you may have rights under §74.1203 of the rules.  Please consult with an attorney if that is the case.

What is a minor change for a translator?

In order for the move to be considered minor, there must be some overlap (even if it is minimal) between the service contours of the current facility and the proposed site.  Channels can only be changed to first (+/- 0.2 MHz), second (+/- 0.4 MHz) or third (+/- 0.6 MHz)-adjacent as well as intermediate frequencies (+/- 10.6 or 10.8 MHz).  Channel changes to non-adjacent channels can only take place in the event of displacement where there is a full power broadcast application that actually triggers the displacement (this is different, and stricter than LPFM rules).

What can an LPFM station do if a translator moves close to their area?

If your station is already on the air at the time when the translator applied for the facility that they were authorized for, LPFM stations should find out if there are any listeners to the LPFM station within the area that the translator proposed as their 60 dBu primary service contour.  If you get any statements from bona-fide, non-interested (meaning, not related to the station management/board members/employees/volunteers/etc.) listeners, you may be able to file a complaint under §74.1203 of the rules.  While no LPFM station has reached this stage, it is REC's understanding that LPFM stations are protected under this rule.

If you have any issues involving interference or want to make a move, please contact REC at 1-844-REC-LPFM.

If you need to file an interference complaint, and you need assistance, please contact an attorney.  We have a small list of LPFM-friendly attorneys on our Recommendations page.