According to a story in Radio World, FCC Commissioner Ajit Pai speaking at the Radio Show in Nashville states that the FCC should consider a new FM class C4.  According to Pai, "An NPRM would allow us to ask the right questions, explore the advantages and disadvantages of the proposal, and receive the view of all stakeholders.  Then, we would be in a much better position to determine whether to implement this idea."

Originally proposed by SSR Communications in RM-11727, Class C4 would have a standard facility of 12 kW at 100 meters above average terrain.  It would fall between Class A and C3.

The Class C4 will be available in most parts of the country except in areas where Class B and B1 stations are available which include the Northeast, Mid-West, Calfornia south of 40 degrees latitude, Puerto Rico and the U.S. Virgin Islands. No "B" equivilent has been proposed nor there has been any mention that it would even be considered.

Class A stations that can meet the minimum distance separation to other full-power stations on a higher C4 distance sepration chart will have the ability to upgrade.  It may be likely that some Class A stations may have to move tower sites in order to meet the minimum seprations.  No matter where a station moves, the proposed site must still be able to place a city grade (70 dBu) city-grade contour over the entire community of license for commercial stations.

Potential interference to stations close to Class A facilities

In this example, we have a hypothetical LPFM station on flat earth with a perfect 5.6 km service contour (in green). A Class A station is located 89 kilometers away. This is legal spacing under §73.807 but it less than the 92 km that the FCC advises the LPFM station may receive interference.  This LPFM station may already be experiencing some interference to the east.    The interfering contour of the station as a Class A is shown in red.  The interfering contour of the full-power station upgraded to C4 is shown in blue. 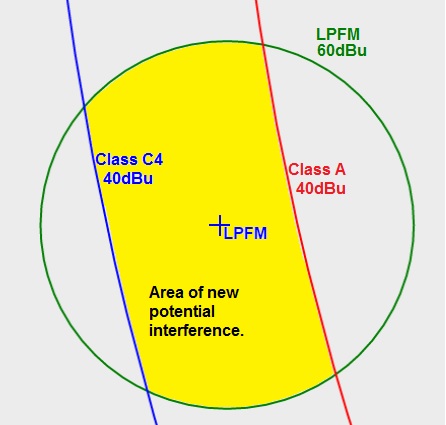 If the FCC amends the rules to add Class C4, the §73.807 recommended values for "no interference received" will be 104 km for co-channel and 57 km for first-adjacent channel.

One of the issues that we will need to work out in the rulemaking process is how LPFM stations will be required to protect the new C4 service class.  First a quick refresher on LPFM to full-power distance separation requirements.  As we mentioned already, the FCC assumes each facility is  the maximum parameters for their station class and on a flat earth.  The full power station's service contour is the area that is protected and where the station is expected to serve.  In addition to the standard service contour, the FCC added an additional 20 km "buffer zone" to all full-power service contour classes.  This was done in the original rulemaking and was put in place to allow full power stations to make site moves without causing much impact to the LPFM stations.  In the real world, this buffer zone never helped.  The LPFM has an interfering contour.  This is the area where and LPFM is expected to be heard or otherwise could cause interference to another station.  There are different interfering contour sizes for co-channel, first-adjacent and second-adjacent channel.   The buffer zone is not used for second adjacent channels.

Now, if we were to include the full 20 km in revising §73.807 to introduce C4, the distances would look like this:

However, there is an interesting caveat.  When Congress passed the Local Community Radio Act of 2010, they stated in section 3(b):

(A) low-power FM stations; and

Those words "in effect on the date of enactment of this Act" is very important here because when the LCRA was enacted in 2011, there was no Class C4 service.  In fact, the LP-10 tables were still codified in the rules.  This means that under our interpretation of the LCRA, the new Class C4 is not specifically protected under the LCRA.  This means that if the FCC wants to, they can place Class C4 protections into one of the current service classes.  If they were to place C4 in with Class A, this means the the minimum distance for co-channel and first-adjacent channel would not change.  This means no impact on LPFM stations needing to move closer to the 67 km barrier which in some cases may not be wise due to the additional interference contour from a Class C4 but if the two stations are separated by terrain or for whatever reason, that Class C4 is not interfering with the LPFM, then that extra flexibility will be nice.  Because there is no buffer zone for second-adjacent, we will still need to extend the minimum spacing on second adjacent from 29 to 34 km.

For areas that are already second-adjacent channel short-spaced, a hypothetical non-directional Class-A station upgrading to Class-C4 will increase their field strength at your location by 3 dB.  This means a slightly smaller "overlap zone" which for some applicants may mean the ability to use a less expensive antenna (such as using a 2-bay instead of a 3-bay) or otherwise just a smaller area around the antenna that needs to be protected.

What about LPFMs being shut down/displaced because of interference to C4?

If your station is currently legally spaced to a Class-A station (67 km co-channel, 56 km first-adjacent), you will likely have nothing to worry about.  Since there is a 20 km buffer zone between the hypothetical Class-A protected service contour and the hypothetical LPFM interfering contour, the increase in the full-service service contour will only move your station's interfering contour 5 km closer to the new protected contour leaving at least 15 km of buffer.

§73.809 of the FCC rules states that interference by an LPFM towards a full-service FM station happens when (on co- or first-adjacent channels) the interference is predicted to occur and actually occurs within:

As we stated, on co-channel, the interfering contour of a hypothetical flat-earth LP-100 station is only 18.6 km.  The size of the city grade contour of a hypothetical flat-earth Class-C4 station is 19.5 km.  If your LPFM station is right at the minimum 56 km required, there will still be 17.9 km of clearance between the LPFM interfering contour and the Class-C4 city-grade contour. 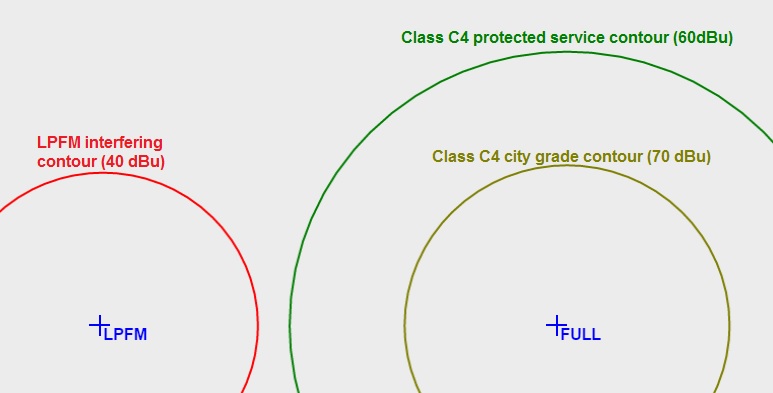 So in most cases, as long as you are not short-spaced to a Class A station (because the Class A made a subsequent move after your station was authorized at its current location), then you should have nothing to worry about.

In 2014 in our comments on the C4 proposal, REC showed how even if both LP-250 and Class C4 were created (and the FCC accepts our request fo C4 to have the same minimum required distance as A), the flat-earth interfering contour of the upgraded LP-250 and the flat-earth protected contour of Class C4 will not overlap and remain well clear of each other due to the 20 km Class-A buffer zone. 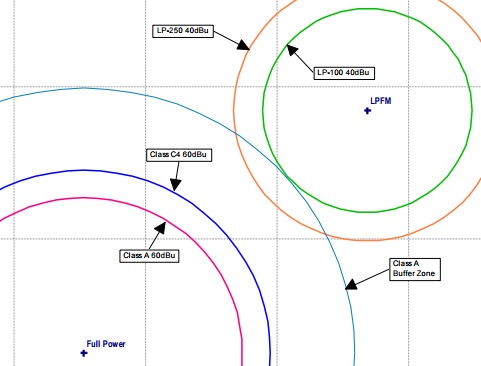 In 2014, REC conducted a study of the stations that were authorized and proposed at that time. At that time, we found 225 legally-spaced LPFM stations that are located within the interfering contour of a Class A station. These stations may receive additional interference with the upgrade to C4.  We also found 17 LPFM stations that are short-spaced to a Class A station because of subsequent application activity by the full-power.  In comments filed with the FCC, REC's position at the time was that because of the increased noise floor caused by upgraded stations, the upgraded C4 class should be counterbalanced by an upgraded LPFM (LP-250) service.  If C4 goes to NPRM, we will re-evaluate all LPFM stations and nearby Class A stations that are eligible for upgrade to determine the impacts.  REC is cautiously supportive of the Class C4 but only in a manner where it can be implemented with the least impact on LPFM and in a manner that assures that LPFM can be maximized.

These examples are based on the perfect "flat-earth" theory that the FCC uses to write the LPFM rules.  LPFM stations in extreme terrain (such as "foothill stations" with high elevation over a valley but low HAAT) may have contour overlap or experence more substantial interference to or from the upgraded class C4 stations.  If you need asssitance, you may contact REC for assistance.

If it is eminent that C4 will go to a notice of proposed rulemaking, we will look at offering more tools to help LPFM stations determine what the impacts are at the station level.

Also, if an LPFM station does experience increased interference as a result of the C4 and it can be documented (through contour overlap, increased field strengths, etc.) and there are alternate non-adjacent channels, it may be possible for the LPFM to change channels with a technical showing in accordance with §73.870(a) of the rules.  REC is very experienced in these types of channel changes.

We need to continue to support LP-250.  We need LPFM stakeholders to continue to contact the Commissioners (especially Ajit Pai) and your federal legislators to get the wheels in motion to make LP-250 a reality.  Done right, it can work together with C4.

For now, we just wanted to tell you that Class-C4 has moved slightly closer to reality.

For more help, please participate in the LPFM group on Facebook.  This is an REC supported help channel.