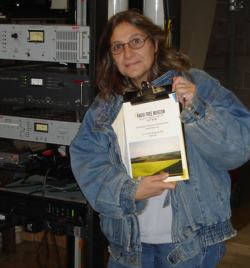 REC Networks regrets to report the news of the loss of one of our dearest friends, Donna DIBianco.

For those who have ever attended a recent Grassroots Radio Conference or have been involved in a NCE or LPFM station, you may know Donna. Donna, also known as the "Community Radio Goddess" would travel to different radio stations, especially those that were established after the 2007 NCE window to provide on-site support to assist stations in starting up their operations.  She referred to herself as a "start-up specialist".  Donna developed her own guides for broadcast stations to use to assure they remained in compliance.

Donna also was very involved in the organization and presentation of the Grassroots Radio Conference.  Donna really cared about the GRC to assure that it would be a great experience for anyone who attended.  At the GRC, Donna would use her skills and acquired experience to deliver workshops on compliance and other issues.

As a person, Donna was spunky, forward thinking with a positive can-do attitude.

According to very reliable sources, Donna DiBianco passed away on Monday, April 27, 2020, likely due to complications of cancer, a battle she has been fighting for the past several years.

Donna's inspiration and knowledge did contribute directly and indirectly to the work we do here at REC.  Donna not only left a mark on every station she ever touched, but she left one here at REC Networks and that mark will always remain there.

Donna will always be a goddess.

May her legacy live on.