Now that the filing window for new noncommercial FM (NCE FM) broadcast stations has now passed and the FCC is in the process of resolving groups of mutually exclusive applications, this Advisory Letter is now obsolete.  Information regarding impacts to existing LPFM stations operating on Channels 201~222 (88.1~92.3) is addressed in REC LPFM Advisory Letter 13.

For historical purposes, we will retain the language of this Advisory Letter below.

The following is a revised Advisory Letter from REC Networks to Low Power FM (LPFM) stations operating on reserved band channels 201~220 (88.1~91.9) and on channel 221 (92.1), which is first adjacent to channel 220 (91.9) to inform these stations about an upcoming filing window at the FCC for primary full-service facilities that can cause interference to or displace secondary LPFM stations.

Between November 2 and November 9, 2021, the Federal Communications Commission (FCC) iwill conduct a filing window for new full-service noncommercial educational (NCE) broadcast stations in the “reserved band” (channels 201~220, frequencies 88.1~91.9).  This window will be for new full-service “full-power” FM broadcast stations with effective radiated powers of up to 50 or 100 kW, depending on which portion of the country the station is located in.   The last such filing window was conducted in 2007.  Stations from this window could be on the air as soon as early 2022.

§73.809(a) of the rules state that full-service stations are protected from LPFM interference to the direction reception of the full service station by the LPFM station operating on a co-channel or first-adjacent channel (+/- 0.2 MHz), provided that the interference is predicted to occur or actually occurs within:

Predicted interference shall be calculated using the contour overlap model. Actual interference will be considered to occur whenever reception of a regularly used signal is impaired by the signal radiated by the LPFM station.

If the filing of a new or modified full-service facility is predicted to place the LPFM into a situation where they will be interfering under the criteria already stated, the LPFM station will be afforded a chance to demonstrate that interference is unlikely.  If interference is still likely, then the LPFM station must cease operations at the time when the new or modified full-service station starts on-air program testing.

Even in cases not shown above, a new or modified full-service FM station on the same or first-adjacent channel of an existing LPFM facility may result in interference.  Depending on the location of the station, this interference can be a loss in coverage in a particular direction or more destructive interference.  LPFM stations should consult with REC or a consultant of their choice to determine the potential impact of a proposed or granted full-service facility on the continued operation of the LPFM station.

§73.870(a) of the Rules permit LPFM stations to move up to 7.2 miles (or further in some cases) and upon a technical showing of reduced interference, a change to any available channel.  Without the technical showing, channel changes +/- 1, 2, 3, 53 or 54 channels are still permitted.

When changing channels or moving to a different location, that location and channel combination must meet the distance separation requirements specified in §73.807 (see exception in the next paragraph).  It is important that the FCC is unable to give waivers of distance separation in respect to full-service stations, no matter how compelling the argument is because of statutory requirements in the Local Community Radio Act.  The FCC, by precedence, will not give waivers in respect to short-spacing (by distance) translator facilities or other LPFMs, even if a technical study can demonstrate no interference or even if the other station agrees to the short-spacing.

LPFM stations that are now short-spaced to a full-service FM station (or FM translator) as a result of a subsequently authorized full-service or translator facility may not move closer to that facility.  It may move to a different location that is the same distance away.  Keep in mind too that when calculating distances, they are rounded to the nearest kilometer.  Therefore, 10.6 kilometers is the same as 11.4 kilometers.  A short-spaced LPFM station can move further away from the short-spaced station even if the new distance still does not meet the minimum distance separation requirements.

LPFM stations most likely to be impacted are those located outside of the city centers of the top 100 media markets as the availability of new NCE stations in urbanized and suburban areas is fairly limited.  Overall, due to the previous rules that were in effect for the 2013 and the 2000/2001 LPFM windows, there are very few LPFM stations operating in the reserved band due to the need to protect Channel 6 TV stations, both full-power and low-power.

In the 20-year history of LPFM, there have been very few forced displacements.  The areas where displacement is likely in the 2021 NCE Window are also likely to have alternative channels available for channel changes.

On the map below, areas that are not shaded in red are potential areas where new NCE stations may be proposed subject to the rules: 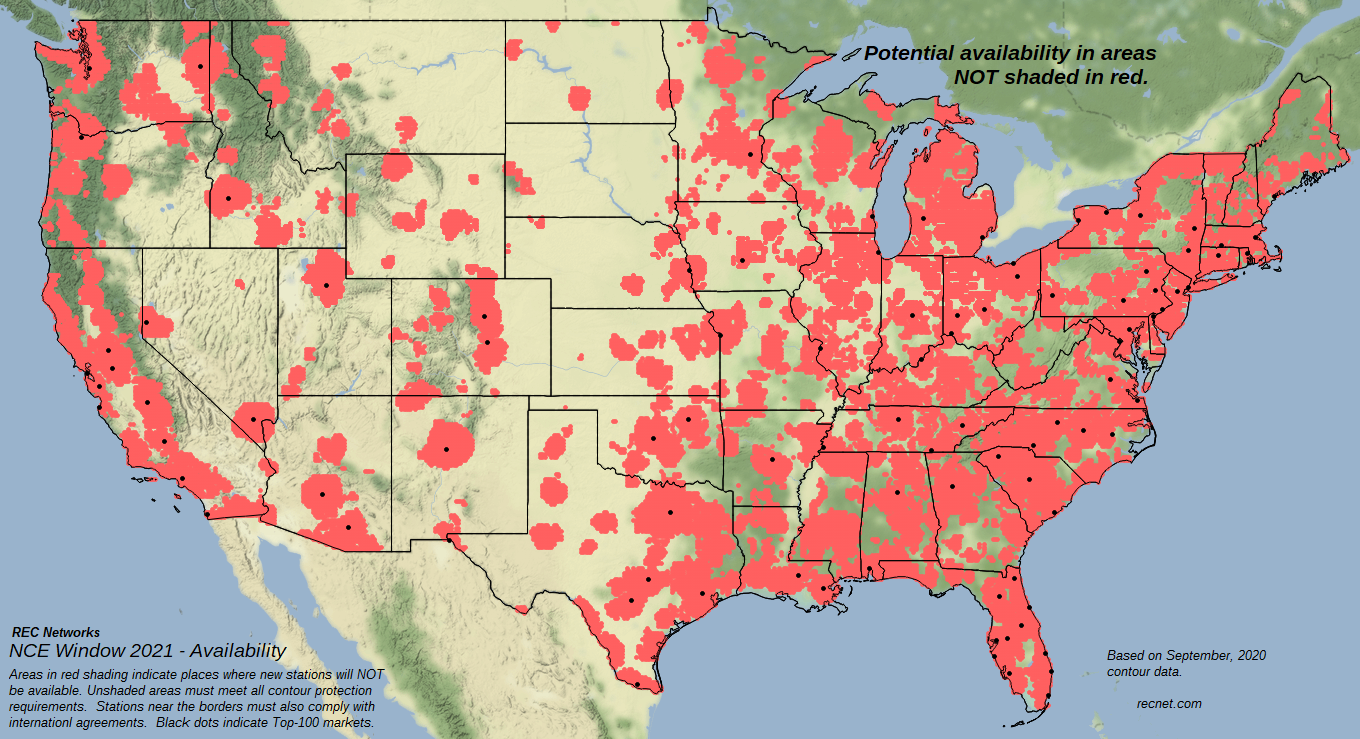 Like with LPFM, competing applications filed in a NCE filing window will be declared mutually exclusive.  Due to the contour nature of full-service NCE, there is a possibility of “daisy-chained” MX groups being formed that can cover a wide area.  In those cases, its possible there will be only one winner.  LPFM stations that may be impacted by these MX applications should carefully watch the progress made in the filing window in order to determine whether displacement may be likely.

Throughout this window and every day, we must remember that LPFM stations are secondary and are mere “guests” on the dial.  LPFM stations are not entitled to any protection from full-service (primary) stations and must give way when necessary.  Full service stations should never be contacted or bullied by LPFM stations to “turn their power down”, etc.  (trust us, we have seen this behavior in the past) If you have evidence that another station is not operating in accordance to their licensed parameters, a complaint can be filed with the FCC.

During this filing window, LPFM stations that can propose a technically qualified facility may file in the window for a full-service station. It is important to remember that an LPFM station (regardless of channel i.e. 88.1~107.9) would be required to have to change channels into the reserved band (and in many cases, within the reserved band) and that once the full-service station is constructed, the LPFM license must be fully divested (either through surrender of that license or through the assignment and consummation to a different eligible nonprofit organization).  LPFM stations in the "non-reserved band" (92.1~107.9) are unable to "upgrade" on their existing channel.  For more information, see our NCE Window Information Sheet.

If you have any questions, there are plenty of sources for help:

At REC, the advice is free.  If you feel that it is worth more than that, please visit recnet.com and click on the [DONATE] button.  Thank you for your support of REC’s efforts!